Here is a complete list of paperback titles by Lisa Maliga.

What’s the difference between French and Swiss macarons? Swiss meringue is gently heated, and the macaronage process takes seconds, not minutes.

This book is designed for bakers of all levels. Follow each carefully detailed recipe and bake stunning Swiss macarons in your own kitchen.

Helpful information includes the best ingredients and equipment to stock your kitchen, plus the easy macaronage technique that will save you time and energy.

With a photo of each recipe, Baking Macarons: The Swiss Meringue Method, offers everything you need to bake beautiful and delicious macarons. You’ll learn two methods to making the Swiss meringue, including one that is more economical. Plus, there are 20+ new tried-and-tested macaron recipes.

Some of the flavors include Minty Chocolate, Raspberry Cheesecake, and Apple Spice macarons.

The book was written by someone who went from baking box mix brownies and cupcakes to discovering the joy of baking from scratch. With a photograph of each finished treat, the reader will be inspired to try baking these delicious recipes.

Bake beautiful and delicious French macarons in your own kitchen. This collection of tried-and-tested recipes allows bakers to create these tasty and colorful confections.

The author details what equipment and ingredients you need, offers numerous helpful tips, resources, and shares more than 30 recipes for you to whip up an array of elegant French delicacies.

Baking French Macarons: A Beginner’s Guide, offers everything you need to bake stunning macarons that will impress anyone who tastes them.

Some of the flavors include Cinnamon Caramel, Tangy Orange, Key Lime, and Acai macarons.

The Soapmaker’s Guide to Online Marketing

Soapmakers and crafters, learn how to grow your online presence! “The Soapmaker’s Guide to Online Marketing” is packed with detailed information on designing, building, and promoting your website. Learn how to write a press release. Get loads of free and low cost promotional ideas. Attract customers by blogging, making videos, and showing off enticing photos of your soaps and/or other bath and body products. Written by the author of “The Joy of Melt and Pour Soap Crafting” and more than a dozen other soap crafting books.

The Aroma of Love

Yolanda Carter is gearing up for a hectic holiday season at her bakery, Yolanda’s Yummery.

The adjoining Beverage Bar is thriving due to owner Nigel Garvey’s expertise along with that of shift manager Quinn Hendrickson, a barista and a baker.

Visiting her grandmother’s gravesite, Yolanda is surprised to see a woman putting pies into an old-fashioned station wagon. Her parents mention an unsolved murder of her grandmother’s best friend who was an amazing pie baker. The story of the 1960s crime touches Yolanda, along with her new friend, Detective Winston Churchill. Her growing sleuthing skills lead her to search for the killer.

In between investigating and baking batches of pies in time for her latest product launch, Yolanda discovers more about the sweetness of love. And who is heating up the kitchen with Yolanda?

With the successful launch of Yolanda’s Yummery in the trendy Los Angeles suburb of Brentwood, Yolanda Carter is on a roll. Her fame is starting to grow as news spreads about all her delicious desserts. An accompanying Beverage Bar will open in three weeks. She’s involved in a budding romance with sophisticated British tea baron, Nigel Garvey. Life is sweet.

Someone is framing Yolanda for the crime. Lead investigator Detective Churchill is certain that she murdered the captain. Best friend Teagan Mishkin is also a suspect and wants to clear both their names. Will Yolanda’s relationships be derailed by the daily disasters she’s encountering? Can those Magical Cakes of Love save her and the yummery?

Yolanda Carter comes from a family of artisans and lives in her deceased grandparent’s cottage in Sherman Oaks, California. She works at a small cat shelter but dreams of owning a bakery. Her friend from high school, Teagan Mishkin, knows that Yolanda needs money and suggests better paying work as a cocktail waitress. The interview takes an unexpected turn and she stumbles across a scheme to close down the cat shelter. The plan Yolanda concocts may be the only way to save the shelter. Helped by her parents, coworkers and friends, a rising young blogger also takes an interest in her plight. Will she bake the best brownies of her life?

It’s 2009. Lisa Hansen is impacted by the great recession and can’t focus on her writing career. She has to make the tough decision to stay in Los Angeles or return to her former Midwestern home. Not having seen her mother in over a decade, she moves back in with her in a suburban semi-retirement community. Confronted with long forgotten memories, Lisa finds it difficult to adjust to life in Nadir. She works a couple of dead end jobs, and meets Gordon, a sexy British bakery owner. An opportunity to freelance for him and work as a writer/photographer at The Factory ensures a better income. But how long will she be confined in a lifestyle that she has long outgrown? “Notes from Nadir” is an alternatively poignant and amusing story of life’s unforeseen journeys, sorrows, and rewards.

Where is Nadir?
Merriam-Webster defines nadir as “the lowest point.” And that is where Nadir is located. It’s not a place that is found on any map. No GPS will guide anyone there. Nadir is a state of mind.

Hollywood After Dark: 3 Tales of Terror ~ This trio of horror novelettes takes place in Los Angeles and Hollywood. SATAN’S CASTING CALL: Duncan Smith-Holmes is a struggling young actor who is in desperate need of a paying gig or he has to leave Hollywood. But a bizarre casting call and an opportunity to land a major role in a high budget movie is something he can’t pass up — no matter what the consequences. AN AUTHOR’S NIGHTMARE: Life is perfect for hot young chick lit author Penelope Anne Pennington. Her serialized “Carlotta’s Cakery” books are all bestsellers. She is about to launch a cakery. A series of films based on her books are in pre-production, along with a reality TV show. She has romance in her life with her attorney boyfriend/soon-to-be-fiancé! But something strange is happening to all her outgoing correspondence — what she sends isn’t what her correspondents receive. Bizarre printed and electronic correspondence is being sent to her. Is it a rival author? Or is it something more dark and malevolent, something not of this world? HOLLYWOOD STARZ STORAGE: Retail employee/aspiring screenwriter Andy Tuttle is evicted from his apartment by the landlady’s only son, the obnoxious King Dixon. Searching for an affordable place proves so difficult, Andy ends up staying in a storage locker along with the rest of his belongings. The chilling events that occur inside Hollywood Starz Storage unit, #319-H won’t be forgotten by Andy—or the reader.

How to Make Handmade Shampoo Bars: The Budget Edition ~ This innovative book includes 25+ recipes for shampoo bars, hair rinses, and hair masques. It contains many black and white photos, step-by-step instructions, and a chapter on natural additives. You get fragrance and essential oils information, and the creative labeling and packaging ideas chapter includes several photos. There is lots of information for both melt and pour and rebatch/hand-milled soap bases and how to craft fine bases into wonderful shampoo bars for all hair types. “How to Make Handmade Shampoo Bars: The Budget Edition” is written and photographed by the author of “The Joy of Melt and Pour Soap Crafting.”

I WANT YOU: Seduction Emails from a Narcissist ~ Arlen J. Stevenson is a narcissist who uses his scant literary accomplishments to entice his online victims. Meeting, seducing and destroying vulnerable women is what drives this Alabama-born man. He flirts heavily with them via email or instant messages and often meets them in his lake house or at the woman’s place. These emails are presented in the raw to reveal how Arlen charms and lures these women. Being the owner of a vast MySpace site, he has access to thousands of victims. “I Want You: Seduction Emails from a Narcissist” is comprised of various emails that show Arlen’s arc of seduction with 18 different women. You’ll meet poetic Southern Pecan, desperate Betsy, flirty Debra, and new divorcee Ginger. Arlen admits to that he’s married so the gals appreciate his honesty. The love and long term relationships he proposes to the women lasts as long as it satisfies his ego and sexual cravings. This is a unique volume as it can be read as either a sequel or a prequel to “Love Me, Need Me: A Narcissist’s Tale.” 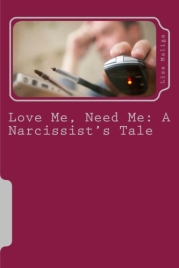 Love Me, Need Me: A Narcissist’s TaleLove Me, Need Me: A Narcissist’s Tale ~  is about a bumbling sexual predator, narcissist, and author of three insipid zombie books. Middle-aged Arlen J. Stevenson hails from Alabama. His relentless and often hilarious pursuit of women online leads him to our other protagonist, Los Angeles-based writer of term papers, Helena Hoffman. She isn’t aware of what Arlen is as she only sees his amusing and entertaining side in their daily email correspondence. Told in alternating points of view, we see Arlen’s self-absorbed lifestyle as he endeavors to screw his numerous catches all over the South. Helena and Arlen get friendlier via their online communication, and he invites her to be his personal manager because of her communications skills, gullibility factor, and location. Unlike his other victims, she never sends him pictures of herself, but she launches a MySpace site for his new company. Soon he realizes there are thousands of available women in his region alone! Unlike the jailbait that many online stalkers pursue, Arlen chases after their mothers and grandmothers. Helena is aware of his perpetual cheating and decides to investigate it in person. What happens after that is alternately scary and darkly humorous.

North of Sunset ~ It’s 1996 and Hollywood is thriving in the era of excess. Sherman Lee is a volatile action movie producer who can’t keep an assistant. Wesley Barron is a wild actor who stars in his best friend’s hit movies. But their partying is taking a toll. Enter novice temp employee Emily Karelin who is sent to work for Sherman. How long will she last? Can she handle the hours, the creative people, and the drugs?

Sylvia Gardner is a naïve library clerk who lives with her dysfunctional mother in Richport, Illinois. Vivian tells her daughter not to trust men because they only want to use her. After being dumped by her first boyfriend, Sylvia falls in love with an English actor after watching him on a PBS drama. Researching Alexander Thorpe’s life and career for two years, she saves her money so she can visit him in his Cotswolds village. She stays at the Windrush Arms Hotel, soon discovering they share a secret connection.

Complications ensue when Harry Livingstone, the hotel’s drunken proprietor, takes a fancy to the young American. As in her dreams, Sylvia and Alexander get together – but with unexpected results.

This site uses Akismet to reduce spam. Learn how your comment data is processed.