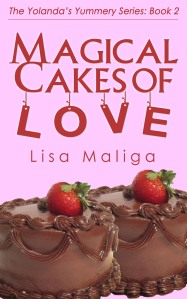 In Magical Cakes of Love, there is romance and mystery as one of Yolanda’s regular customers has gone missing. For those of you who’ve read The Great Brownie Taste-off [which is now FREE], you’ll know that Yolanda Carter always refers to her customers as appreciated guests. In the second book, appreciated guest Captain Angus, a homeless man who enjoys her brownies and cupcakes twice a day, mysteriously vanishes. As the story unfolds, the lead investigator thinks that either Yolanda or her best friend, Teagan Mishkin, might know more about the missing man’s whereabouts. Way more as they’re his suspects.

With the successful launch of Yolanda’s Yummery in the trendy Los Angeles suburb of Brentwood, Yolanda Carter is on a roll. Her fame is starting to grow as news spreads about all her delicious desserts. An accompanying Beverage Bar will open in three weeks. She’s involved in a budding romance with sophisticated British tea baron, Nigel Garvey. Life is sweet.

Someone is framing Yolanda for the crime. Lead investigator Detective Churchill is certain that she murdered the captain. Best friend Teagan Mishkin is also a suspect and wants to clear both their names. Will Yolanda’s relationships be derailed by the daily disasters she’s encountering? Can those Magical Cakes of Love save her and the yummery?

This is a clean romance/cozy mystery, and not only was it fun to write, the cover was a joy to photograph. Yes, I had to go to the yummery to pick up one of those Decadent Chocolate Magical Cakes of Love and take almost 100 pictures of it. The day was warm and sunny with a high of 85 and even though I’m cold blooded I had to lower the temperature of the air conditioning unit from a comfortable 78 down to 70 degrees.

It was difficult to avoid sampling the cake, and I thought about cutting a slice and putting it on some fine china but I did that after I finished taking and previewing the pictures.

I’d like to stress that Yolanda doesn’t ordinarily make wedding cakes but in this book she makes an exception, as a favor to a good friend’s sister who’ll soon be tying the knot.  Here is part of that scene:

Suddenly a shorter woman with dyed black hair pulled into a stubby ponytail walked in, looking around. She wore a shapeless mauve sundress paired with black sneakers. “So this is the yummery,” Rosemary said. “Kinda on the small side…” She walked over to the display case and saw only three Magical Cakes of Love and barely a dozen brownies. “Did we come at a bad time?” Rosemary asked, her forehead wrinkling.

“Rosemary! So nice to see the bride-to-be,” Yolanda said to the disgruntled woman. “Well, no, you came at the end of the day. I was just going to put everything in the fridge, but I made sure to save you a Decadent Chocolate and a Fancy Vanilla Buttercream Magical Cake of Love to test.” She gestured, moving towards the back of the store. “Let’s go back to my office and we’ll sample them.”

Thirty minutes later and they were still in Yolanda’s office with the two cakes cut into several slices, and the chocolate cake had fewer of them.

“Now I tried on 128 wedding dresses before I found the perfect one…” Rosemary commented, taking another bite of the chocolate cake slice on a paper plate. “It was a nightmare trying to get one in my petite size and style because I wanted the Sweetheart Serenade model. It’s ecru lace with puffed sleeves edged with rhinestones and pearls and a silk crinoline skirt with a detachable eighteen-foot lace train edged with pearls…oh you’d think I was looking for something unusual!” She sighed and rolled her big watery blue-gray eyes. Rosemary pulled out her iPhone and punched the screen a few times. “Here’s the winning dress…” She turned the phone’s screen so it faced Yolanda and a blurry shot of some off white creampuff meringue of a wedding dress was seen.

“That looks nice,” Yolanda stated diplomatically, glad when the phone was removed from her line of vision.

“Well it should. And let me tell you about the sixty-one punch recipes before the right one … and I think the florist is going to be changing again soon…” She enjoyed another bite of her cake, paused, and took another. She sighed loudly. “You’d think people could handle brides changing their minds occasionally.”

Magical Cakes of Love is available at Amazon and other online bookstores.

2 thoughts on “Magical Cakes of Love: (The Yolanda’s Yummery Series, Book 2) – Plus Excerpt”

This site uses Akismet to reduce spam. Learn how your comment data is processed. 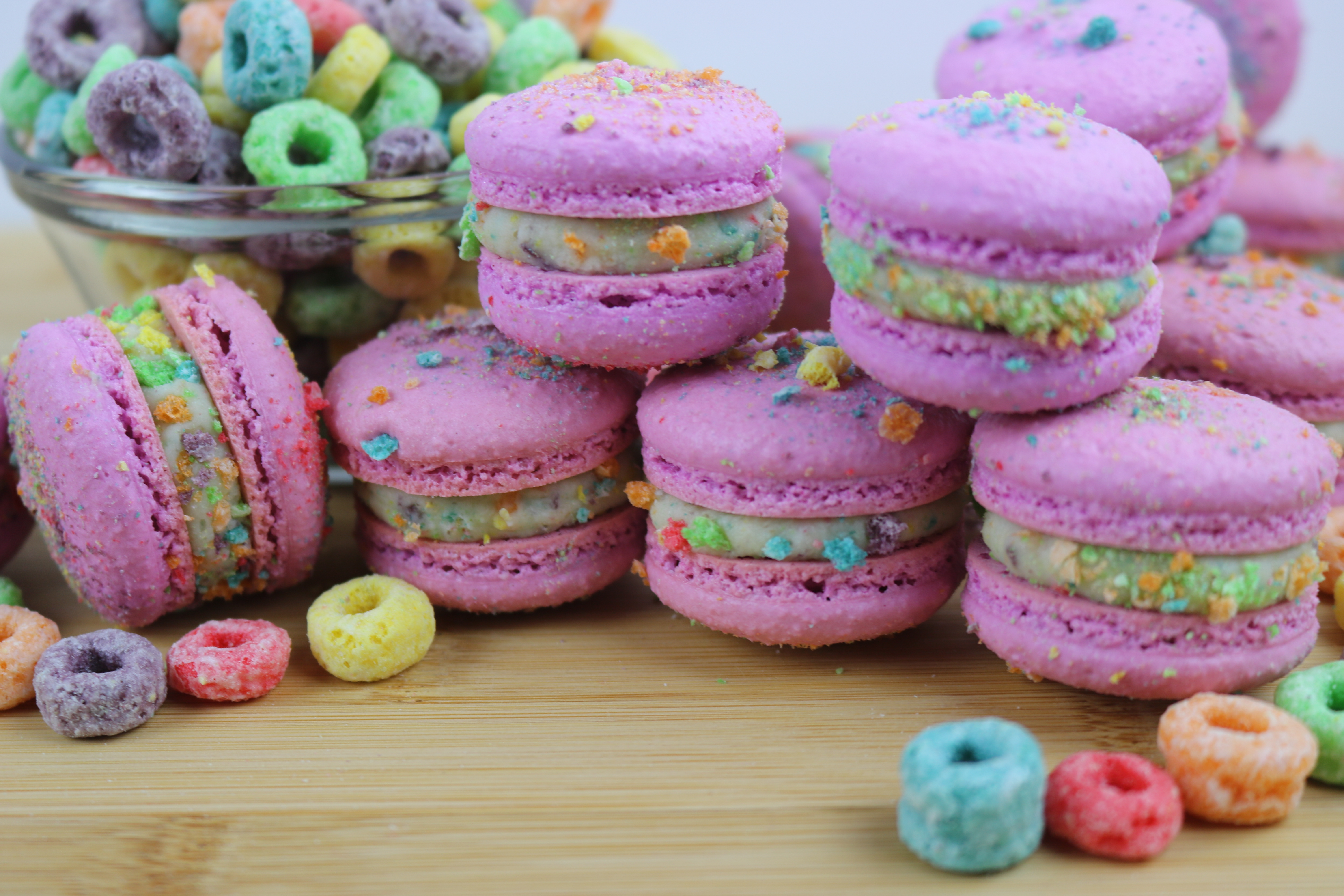 They Are Trying to Take Our Breath Away

By Lisa Maliga, copyright 2020 When I used to hang out on MySpace back in 2007, I often came across people who had the following quote on their profile: “Life is not measured by the number of breaths we take, but by the moments that take our breath away.” It was a quote that seemed […]

By Lisa Maliga Copyright 2013-2020 This soap comes in its own container or soap dish! I bought this 10-pack of round plastic container and lids at a discount store for a dollar. Each of these little containers holds 2.3 ounces [68 ml.]. They also come in square and rectangular shapes. These are a great time-saver […] 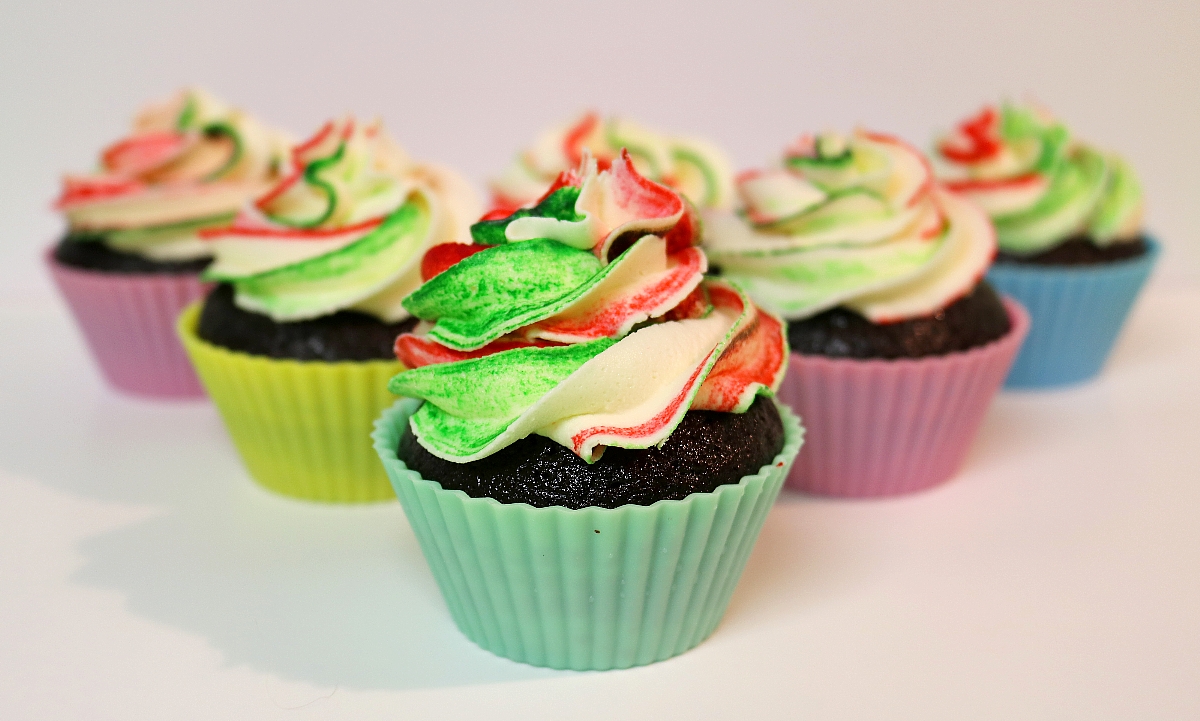 By Lisa Maliga, copyright 2020   Includes 3 full-length dessert cookbooks and more than 50 recipes. Learn how to make many different desserts, no matter what your level of baking experience. It’s easier than ever to bake decadent chocolate cupcakes and brownies. Get helpful tips about decorating and coloring cupcakes, recommended equipment, and loads of […]

By Lisa Maliga, copyright 2020 This is the actual color of the fudge as it contains no added milk, cream, sugar, or butter. Some might call it ruby chocolate bark, except that it’s too thick for that. It turned out like this because I forgot to add the sweetened condensed milk. Roasted and salted pistachios […]

By Lisa Maliga, copyright 2019 I became aware of ruby chocolate when I was watching The Great British Baking Show. A contestant was baking biscuits [cookies] using ruby chocolate. Paul Hollywood, one of the judges, proclaimed that the new chocolate “has a nice kick to it.” Around this time, one of my baking buddies on […]